Today the City of Cape Town, along with its partners the Western Cape Department of Transport and Public Works and the South African National Roads Agency Limited (SANRAL) Western Cape, is delighted to officially open the new R60 million R300/Bottelary interchange – one of the most important road projects for the residents of Cape Town.

It is only one year since we turned the first sod to construct this new interchange.

These new connections will go a long way in alleviating pressure on two of the City’s most important arterials – Van Riebeeck and Bottelary Roads where frustration is growing daily as commuters in Kuils River and surrounding communities battle congestion.

This project is a prime example of the City’s Organisational Development and Transformation Plan (ODTP) in action.

Last year, the City took a bold step to establish the Transport and Urban Development Authority, known as TDA Cape Town, by combining the functions of transport, urban development, and elements of human settlements into one sphere of control with the aim of reversing the effects of apartheid spatial planning.

The TDA must ensure that the city becomes more connected and  integrated, where residents have greater access to transport, economic opportunities, and affordable and  inclusive residential opportunities.

Through this project, we have brought the ODTP to life by working with developers in the area where the City, the Western Cape Government and SANRAL have partnered to build this road with some of the funding coming from the development contribution fees for future developments in this area.

Two of the developers, Shoprite Checkers and VDMV, contributed R5 million each to the project through their development facilitation fees.

This project underscores the City’s commitment to infrastructure-led growth and providing residents with quality roads because we understand the important role that working roads play in economic activity by ensuring efficient movement of goods and people.

The Executive Mayor, Patricia de Lille, thanks the City’s partners: the Western Cape Department of Transport and Public Works and SANRAL Western Cape for working with us to deliver this massive project in such a short space of time.

This project has confirmed how partnerships are vital to achieving progress and responding to the needs of our residents in ways that benefit them and connect them to economic opportunities.

Minister of Transport and Public Works, Donald Grant, said: ‘It was only a year ago when we were here together breaking ground on this important partnership between the Western Cape Government, the City of Cape Town, and SANRAL. Through this project, we demonstrated our collective commitment to addressing congestion in the city, as well as enhancing mobility and increasing access to economic opportunities. We are pleased to have been true to our commitment, with this interchange having been completed on schedule and within budget. This project is testament to what can be achieved through partnerships based on shared commitments’. 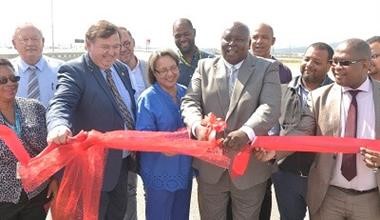 EFG Engineers have regularly attended the CESA Annual Golf Day and continue to do so.

Social responsibility, just one of the pillars to sustainability

Creating a sustainability mindset from an early age

The construction of a bridge at Vlaeberg Road in Stellenbosch is well under way at the start of the Western Cape’s R70.7m level crossing elimination programme. Infrastructural improvements at eight sites will make crossing railway lines safer for vehicles, their passengers and pedestrians.